Journey to the Channel

On Wednesday at 4:30am, as part of a six strong relay team, our CEO Sean Barley is due to set off from Samphire Hoe to complete a cross-Channel swim! We will be covering the swim on Facebook – so keep an eye out for our updates! The team are raising money for Alzheimer’s, a charity close to Sean’s heart.

The story so far….

Sean Barley was diagnosed with a prolapsed disc. Previously, he had been very fit and active, running marathons and playing squash. The injury made even the simplest of movements excruciating. After successful surgery Sean was advised to try swimming to build his stamina and rehabilitate. He began using the swim jets at Nirvana but admits it was a struggle at first – he hadn’t swum much since his school days! He used a snorkel to help his breathing and reduce the twisting action.  Sean’s determination to recover from his back troubles led to great improvements in his overall fitness and strength. He was delighted to be able to start running again!

With his fitness going from strength to strength, Sean was ready for a challenge. Rather than run marathons Sean decided a multi-discipline event with a shorter run would be perfect and carry less risk of injury.  Sean signed up for the Windsor Olympic Distance Triathlon and was feeling confident about both the run and the ride but the 1.5 km swim worried him! Sean was introduced to triathlon coach Jo Lewis who shared top tips to help Sean maximise his potential and reduce the risk of injury. She also advised signing up for the Windsor Mile to build confidence.

Riding high after his Windsor successes, Sean was on the lookout for more exciting open water swims. He had definitely caught the open water swimming bug! Jo continued to provide fantastic training advice and the camaraderie between Jo’s group of likeminded over 50’s was motivational. Sean enjoyed both the social side of training and the healthy competitive spirit!

In 2015, at the Club to Pub Swim in Henley, Jo introduced Sean to Steven and a new dynamic duo was formed! Together the adventure seeking swim buddies completed numerous open water swims including fun events like the Henley Mile, The Bournemouth pier to pier and the Aspire night swim – Sean admits this swim was a little scary! They also pushed themselves and increased their distance, completing the River Dart 10Km the Bridge to Bridge 1.2Km and the 15Km Scilly Swim Challenge.

When Steven decided to take on a year of challenges to raise money for Alzheimer’s charity Sean couldn’t resist joining him!  The year started with a 10Km open water swim in sublime conditions in the Caribbean. By contrast, the next challenge, dog sledding in the Arctic, saw the pair battling against much harsher conditions. Temperatures in the Arctic were over 60 degrees cooler than they had experienced in Barbados but both Sean and Steven absolutely loved the magnificent scenery and incredible dogs!

The year of challenges has to culminate with an extra special challenge. When Steven decided on a Channel Relay Swim, Sean not only signed up but also arranged for Nirvana Spa to sponsor the team. Nirvana Spa is covering all the costs to ensure that all funds raised are available for the Alzheimer’s charity. 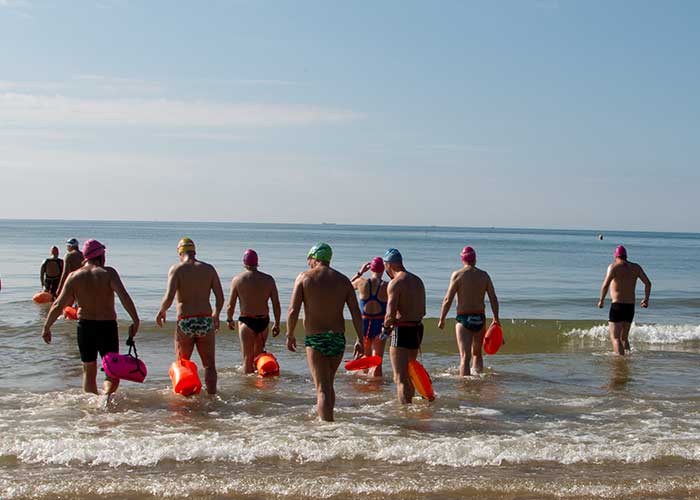 Preparing to swim the channel (without a wetsuit) has required a new level of grit and determination and Sean had to dig deep on cold winter mornings to train his body’s cold response when river temperatures were only just above freezing! Sean claims that, as a result of these exhilarating swims, he has benefited from increased energy levels!

Spurred on by the thought of completing one of the most iconic open water swims and encouraged by both Jo’s advice and the close team bond, Sean persevered through the training. The qualifying swim was tough, despite the beautiful weather, the sea was cold and the jelly fish intimidating! The first swim alongside a boat gave a real insight into the enormity of the challenge ahead – the sea is an unforgiving environment. This challenge is set to be Sean’s most demanding both physically and mentally – and he can’t wait!

Victory across the sea
Scroll to top